How space and time can be manipulated (Vedic Science)

admin
In the previous video we explored how time and space influence inhabitants of different planetary systems in different ways, and how both time and space can be contracted or stretched by the manipulation of the physical laws.

In this second part we are going to explore the subject from two different sides: How Krsna, as the Supreme Personality of Godhead is able to manipulate space, time and physical laws, and how the same laws can be manipulated by ordinary mortals, like yogis and ascetics.

Let’s start with Krsna. As he mentions in the Bhagavad-Gita: kalo 'smi, “time I am”. Time is one of His energies, and just as all the other energies, time is completely under his control. In his pastimes we can find many instances where he manipulates time and space.

In the Srimad Bhagavatam is mentioned that when the gopis came to him at night, attracted by the sound of His flute, desirous of dancing with Him, Krsna made the night extend for the equivalent of a whole day of Brahma, a total of 4.3 billion years! Conversely, when he assumes the gigantic form of Maha-Vishnu with the purpose of creating the material universes, he makes the whole period of the life of Brahma as short as a breath for him. To properly appreciate that, it's worth mentioning that this is a period of time equivalent to 311.04 trillion years of our time!

He can also manipulate the physical laws at will, like when He lifted the Govardhana hill, nullifying the law of gravity. In this passtime, he lifted a huge mountain using just His small finger, using it as an umbrella to protect the inhabitants of Vrindavana from the rain. Normally, it’s not possible for someone to lift a mountain (even if one would be sufficiently strong to do that, the mountain would crumble under its own weight), but by nullifying the law of gravity, Krsna could do it in the most elegant way.

Not only can He manipulate time and physical laws, but he can also manipulate space. For example, when Krsna was present on this planet, he manifested the whole Vrindavana, the whole spiritual sky inside the boundaries of the earthly Vrindavana, that have a circumference of a few dozen miles. It's difficult for us to understand how an infinite space can fit into a finite space, but by Krsna’s will it became possible. As he says in the Gita: pasya me yogam aisvaram: "Behold my mystic opulence!".

Similarly, the city of Dwaraka created by Krsna in the midst of the ocean to shelter the Yadu dynasty was a manifestation of the Dwaraka in the spiritual sky. Just as in the case of Vrindavana, an unlimited space with trillions of inhabitants living in palaces was manifested inside the boundaries of a certain geographical location of our planet.

Both Dwaraka and Vrindavana worked as kind of spiritual portals, where the material and spiritual spheres came in touch. From the outside, one could see the material Vrindavana, that had a limited circumference, but as soon as one entered the area, he would have access to the unlimited spiritual sky. Even nowadays this connection remains, and people who are advanced spiritually are able to see the spiritual reality when they enter Vrindavana.

Apart from Krsna, even mundane yogis can bend space to a certain extent. These are ordinary mortals, like you and me, who attain supernatural powers due to their practice of ashtanga-yoga or by other means.

Such mystical feats are called Ashta Siddhis (the eight mystic powers), and become available when an advanced yogi is capable of connecting with the divine energy, becoming thus a conductor for it. Just like a bar of iron becomes red hot due to contact with fire (and can thus burn, just like fire), or a piece of wire becomes electrified due to a connection with the power-grid, a yogi becomes surcharged with mystical potency when he is able to successfully connect with the source of such potency.

More in the video...

Want to see the rest of the series? Here is the playlist:
https://www.youtube.com/playlist?list=PLOOB1UUBLAcTGPKWu16MMbtdFHXsOQf9p

How space and time can be manipulated (Vedic Science) 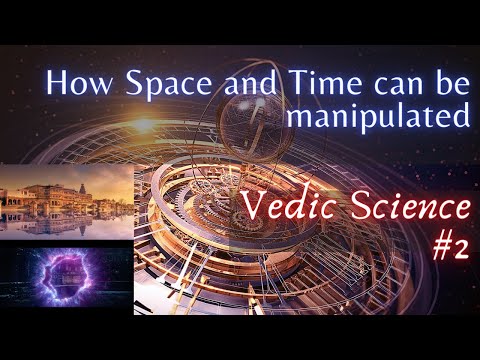 In the previous video we explored how time and space influence inhabitants of different planetary systems in different ways, and how both time and spa...